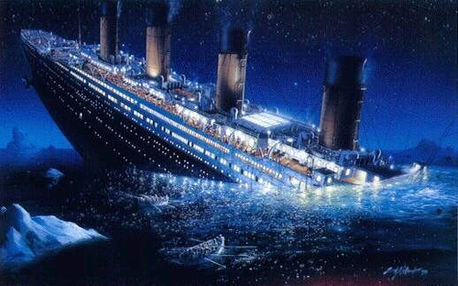 The Collision
The tragic sinking of the "unsinkable" RMS Titanic occurred on April 15th, 1912.  The Titanic was warned of the icebergs that they were approaching by several other ships' signals, the earliest at 9:00 the morning of the collision.   At 11:40 PM, Sunday April 14th, Frederick Fleet sights an iceberg, into which the Titanic collides.  An order is given at 12:15 AM that declared the evacuation of women and children from the ship.  Between 12:45 AM and 2:05 AM, lifeboats were lowered, the first of them carrying only 19 passengers , although it had a capacity of 65.  The last of the available lifeboats were then lowered.  At 2:20 AM, April 15th, the RMS Titanic sank.  For many years, people believed that a huge gash was cut out of the hull of the Titanic.  However, studies showed no signs of a gash, but rather that the steel from which it was made became brittle in the frigid North Atlantic waters and fractured easily during the collision. Additionally, the Titanic was traveling too fast for an area where there was a danger of icebergs at about 21 knots, nearly its maximum speed.  The damage from the iceberg caused five of the sixteen watertight compartments to fracture and flood with water.  The ship then began to tip, the bow sinking into the water, the stern lifting from the surface, eventually causing the power to go out.  The tipping continued until the ship reached its maximum peak stress, at which the Titanic broke in two.  The bow plunged down to the bottom of the North Atlantic, soon followed by the stern.

Evacuation
Initially, women and children were ordered to head to the deck for evacuation.  Confusion ensued when these orders were given, for some took it literally in not allowing men to board the lifeboats at all.  Such cases include Officer Lightoller, supervisor of lifeboats on the Port side of the ship, who did not permit men to utilize the lifeboats whatsoever.  Problems arose with the lifeboat count and capacity when women exited the lifeboats, for they felt no need to evacuate a ship that did not seem to be in any danger.  Lifeboat supply was depleted, for the number kept aboard the RMS Titanic was regulated by the British Board of Trade, drafted in 1894.  Their rule stated that a ship could hold no more than 16 lifeboats, regardless of the amount of passengers.  This hazard did not come off as problematic at the time because people had a very different attitude about accident prevention during this time.  In addition, lifeboats were expensive equipment.  Lastly, a ship was looked at as unsafe if it was carrying many lifeboats, suggesting that it was prone to tragedy.  Third class passengers were thought to have been deliberately kept beneath the deck, but no evidence suggests such occurrences.  Some officers were likely very overwhelmed by the disaster, and kept the third class passengers beneath the deck out of failure to receive any further orders, for White Star had not planned nor prepared for such tragedy to strike in the duration of the voyage.

The site of the Titanic's wreck
Rescue
Many ships received the message of the tragedy of the RMS Titanic on that night, including the Carpathia, Mount Temple, Virginian, Baltic, Caronia, Prinz Fredrich Wilhelm, Frankfurt and the Titanic's sister ship the Olympic.  Many nearby ships altered their courses to get to the site of the crash.  Once it became apparent to the other ships that the Carpathia could get to the location in reasonable time, the rest of the ships continued on their routes.  One ship, the Californian, was only a few miles away from the site of the collision.  However, the captain deemed it unsafe to cross the icy area in the dark.  The radio transmission operator had gone off duty for the night, and therefore the Californian was not able to respond to the distress calls.  Controversy over this issue is still considerable in that some believe that the officers should have looked with greater depth into the lights and rockets in the distance. 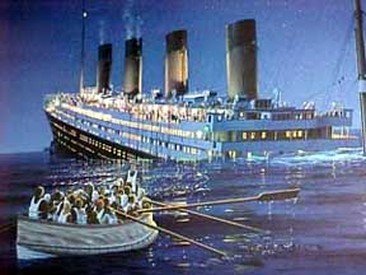 Survivors
Roughly 711 people (passengers and crew) were saved by the Carpathia when they arrived at 4am.  The captain of the Titanic, Edward J. Smith, went down with the ship.  There were arguments on the lifeboats about returning to the site of the sinking to retrieve more passengers.  Most lifeboats did not return due to fear of being pulled under by the suction of the sinking ship or being swamped by people trying to climb aboard the lifeboats.  Of the 711 rescued by the Carpathia, six died either on lifeboats or aboard the ship, and they were buried at sea.  Efforts were made to recover the bodies lost at sea, and they were attempted to be identified.  Among the dead were many wealthy and famous passengers, including millionaire John Jacob Astor and department sore owner Isidor Straus.   Millvina Dean, only two months old at the time of the Titanic disaster and the oldest survivor of the Titanic sinking, recently died at the age of 97 in 2009.

Consequences
Though the White Star Line was absolved at the British inquiry, in the High Court (and subsequently on appeal) the charge of negligence was upheld, and the company was ordered to pay heavy damages to the relatives of several of those lost.
Powered by