Setting Sail
The RMS Titanic's Maiden Voyage began on April 10, 1912.  The ship could have set sail prior to this however the White Star Line Company wanted to see the RMS Olympic, Titanic's sister ship, operational before the Titanic set sail.  The RMS Olympic encountered issues such as a collision and eventually a broken propeller, of which caused it to not be operational and therefore affected the maiden voyage of Titanic.  The RMS Titanic was docked in Southampton, England for 10 days prior to departure.
The Titanic finally set sail form Southampton, England at noon on April 10, 1912.  The journey itself had a rough start as the RMS Titanic almost destroyed the New York, a smaller ship nearby, on its way out of the harbor.   The ship then stopped in Cherbourg, France and the Queenstown, Ireland to finish collecting passengers for the voyage.
The Titanic's maiden voyage was meant to be a memorable one, a goal for White Star Line.  A first class ticket on the Titanic would cost about $100,000 today.  The captain during the maiden voyage was Edward J. Smith, otherwise known as "The Millionare's Captain" because of his popularity with wealthy passengers.  Smith had captained ships for years, but the RMS Titanic's maiden voyage was meant to be the last of his career before retirement.  With his fame and reputation many were ecstatic to have Smith on board.  Thomas Andrews, the Titanic's naval architect also decided to set sail with the ship on its maiden voyage. 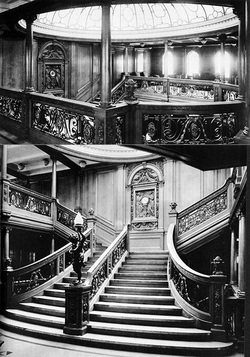 Many famous passengers took their places on the maiden voyage of the RMS Titanic, as many knew the prestige this voyage was destined to have.  Some of these people included millionaire's such as Molly Brown and even the owner of Macy's, Isidor Straus.  The RMS Titanic took passengers ranging from first to third class in order to accompany those from various backgrounds.  The housing for passengers on the RMS Titanic varied depending on the class ticket they had purchased; first class receiving the best treatment and third class receiving smaller rooms and less commodities.
At the time Titanic was the largest ship in existence and had one of the largest capacities for life on board.  At maximum capacity the Titanic could hold about 3,500 people (passengers and crew), on its maiden voyage.  However, the ship only had about 2,200 people in total on board.  The RMS Titanic was not effectively planned out when it came to passenger safety as the ship only had enough lifeboats to account for 1/3 of the people on board during the maiden voyage.  Therefore an even less percentage of people could fit in the lifeboats had the ship been full.
Powered by